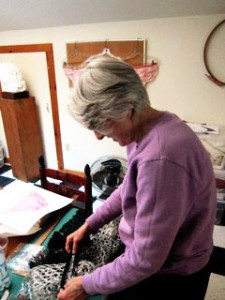 Sharon Myers is a fabric, clay and mixed media artist based in southern Vermont. She began her career in the 1960’s earning a Bachelors Degree in Sculpture and a Masters Degree in Fine Arts and Aesthetics. Since her early academic days, she has put her artistic talents to work in a variety of media. Loving color she tried quilting and weaving, taking a few courses while living in Boston. The color and texture seemed to satisfy her sculptural needs giving her an opportunity to work on larger pieces. She began sculpture again in 2000 when a friend dared her to return to creating portrait busts.

In 2010, Sharon decided to pursue an MFA at Heartwood College of Art in Kennebunk, Maine. Seeking to shake up her creative perspective, she was happy to experiment in new media as part of this program, producing some of her most original pieces to date as part of “The Underwear Project”.

Sharon has published articles in magazines and journals on the art of quilting. Her work has been exhibited internationally as well as locally to much acclaim. 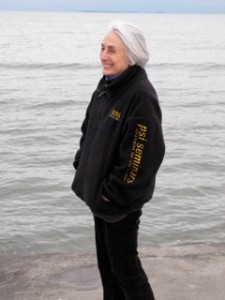 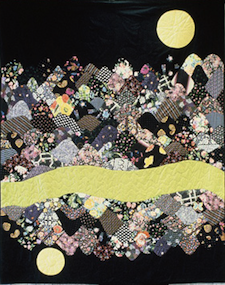 Boston YMCA, Boston, Mass. On and Off Loom Weaving with Marty Holmer and Nancy Sharples 1974-1975

“Breaking with Tradition” The Quilt as Art Form

“The Quilt” New Directions for an American Tradition 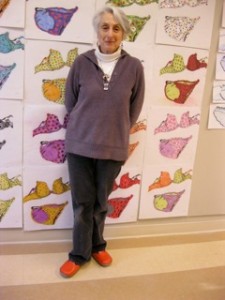 The Quilt, New directions for an American Tradition, Quilt National, toured the U.S. 1983-1984

Breaking with Tradition, The Quilt as Art Form,  toured Canada 1983-84

The Washington Craft Show, The Smithsonian Institute, Washington , D.C. May 1983